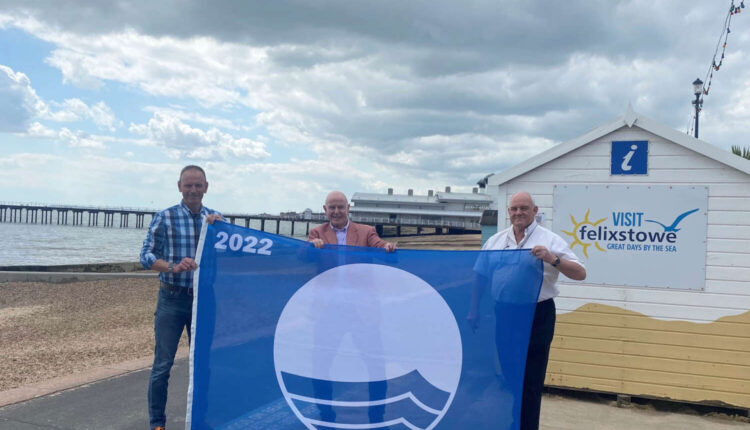 East Suffolk’s beautiful beaches have once again received national awards, ranking them amongst the best in the country.

Each year, the country’s best beaches are awarded Blue Flags and Seaside Awards and this year, four of East Suffolk’s beaches have been selected.

Cllr Letitia Smith, East Suffolk’s cabinet member for Communities, Leisure and Tourism said: “We have outstanding beaches in East Suffolk which are hugely popular with residents and visitors and so we are delighted to once again receive these prestigious awards which reflect the quality and cleanliness of our coastline. Anyone visiting East Suffolk’s beaches this summer can be sure they are visiting one of the best in the country.”

Cllr Mark Jepson, Mayor of Felixstowe said: “We are delighted to announce that Felixstowe has once again been recognised as one of the country’s best beaches. To be awarded a Blue Flag, beaches must comply with several criteria covering environmental education and information, water quality, environmental management, safety, and services. It was a great team effort to achieve these awards and thanks must go to Felixstowe Town Council and East Suffolk Council as well as the army of volunteer litter-pickers who play a huge part in keeping the beach clean. We urge anyone visiting our fantastic beach to leave the beach as they find it, respect our resort, and dispose of litter appropriately.”

Keep Britain Tidy’s Chief Executive, Allison Ogden-Newton OBE said: “The success of these East Suffolk beaches in reaching the high standards demanded is testament to all those who have worked so hard to protect and improve our blue spaces – from beach managers and volunteers to local residents and businesses. The huge commitment needed to maintain marvellous beaches worthy of these awards cannot be underestimated.

“People who visit a beach flying a Blue Flag or Seaside Award can be assured the beach will be clean, safe and meet the highest environmental standards, as well as international bathing water quality standards.”

In total, 151 beaches in England have been presented with an award recognising the quality of the beach, the way it is managed and the facilities it offers to visitors. The Blue Flag is an international award and this year 80 beaches have met the high standard required. 128 beaches are proudly displaying Seaside Awards, including 57 beaches that have received both Blue Flag and Seaside Awards.

Blue Flag is an international award managed by Keep Britain Tidy on behalf of the Foundation for Environmental Education and is presented to well-managed beaches with excellent water quality and environmental education programmes. This is the third consecutive year in which Felixstowe has received the Blue Flag and is a welcome return to Southwold, which was last awarded a Blue Flag in 2018.

The Seaside Award, run by Keep Britain Tidy, recognises and rewards beaches in England that achieve the highest standards of beach management and, in the case of bathing beaches, meet the required standards for water quality and other specified criteria.

The Show With Something For Everybody Come Along For Some Fun