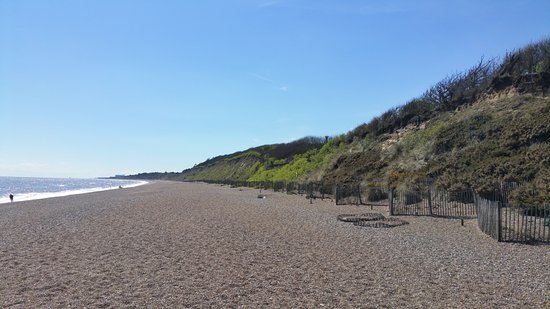 The lost city of Dunwich on the Suffolk Coast, once one of the most important town/ports in the country, was swept into the sea by catastrophic storms in the 13th century and is now just a small village. Medieval homes, businesses and churches were lost beneath the waves. Legend has it that the bells of the lost churches can still be heard, ringing beneath the North Sea, and Dunwich can justifiably be considered England’s contender for the lost city of Atlantis!

Little wonder that the stuff of legend – and history – is also ripe inspiration for song. Suffolk based folk/rock band The Silburys wrote and feature The Dunwich Bells on their Broadside & Mayhem CD and, more recently, on their Live at Springfest album. With lockdown easing – and keeping social distancing regulations – the band felt it was time to commit the song to film.
The video was filmed recently on location in Dunwich, at an indecently early hour to ensure the beach and remains of the 800-year-old friary were deserted.

Band leader and vocalist, Scott Dolling, is delighted with the results. Filmed in black and white, the video, he feels, completely captures the atmosphere of the song and of Dunwich itself. He said: “Dunwich Bells is always a favourite at our concerts with its pounding beat and the open strings of guitar and mandolin replicating the sound of the ringing bells. Having been unable to play live in recent months, it was a great treat for the band to be together and fun to produce.”

He added that the video could make a great backdrop for the song when the band finally gets back to performing live. In the meantime, the video can be viewed at: www.silburyhill.net/gallery.