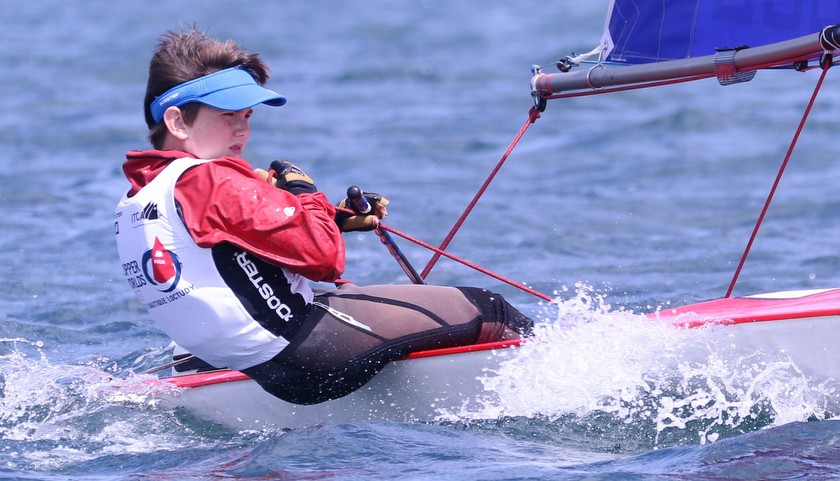 The club is delighted one of their cadets, Sean Woodard (pictured by Simon McIlaine), won the Topper 4.2 World Championships held at Loctudy, France in July. The competition attracted 215 youngsters from around the world, including more than 40 from China and strong contingents from GBR and Ireland.

Racing was held over five days, with three races each day, and there were excellent sailing conditions every day. There were 55 boats in the 4.2 fleet for the lighter weight sailors, and Sean made an excellent start to the week, scoring two seconds and four firsts over the first two days, faltering slightly in the stronger mid-week winds, but under real pressure on the final day he scored another second and another first to clinch the overall victory by the slimmest possible margin.

Sean, aged 14, has been racing from the age of 10, but moved in to the Topper class only a year ago, making great progress through a winter of RYA Squad coaching, and regularly competing nationally in Topper events, many of which attract 150 to 180 sailors each weekend. When not competing around the country, Sean sails at Deben Yacht Club and Waldringfield Sailing Club.

Another member who has been doing really well in his Topper, in the 5.3 fleet, is Euan Harris. Euan took part in a Topper national event at Lowestoft and finished 19th out of 133 boats, which was a good recovery because after the first day, he was lying 60th. At Grafham Water he finished 15th out of 150 boats and at Weymouth 13th of 124.He finished 16th in the Topper National Series overall and was second youth, so that is very pleasing. He is now moving up to a Laser Radial.

After three courses teaching people to sail this year it’s been great to see several beginners teaming up and taking club boats out to gain confidence together. They’ve got some more youngsters going, but also quite a few adults have got started. The flotillas and lazy sailing have been very popular all summer and there has also been lots of good racing.

Their annual club regatta in August was well attended,  with 27 boats competing. After a wet start, the weather turned fine, with some great races and some fun shore-based activities. The fast handicap was won by James and Liz Wells in their Merlin Rocket, who had travelled all the way from Plymouth to take part. The Feva fleet was won by Ben and Jemima Alexander from DYC and the Topper fleet by Trish Hopkins, from Waldringfield SC.

The winner in the yachts fleet was Roger and Diana Hanes from DYC. A member who had never raced before, decided to sign up for the week and won the prize for Best New Helm. Well done Jack Nelson-Tunks. They hope this might encourage more people to race; it’s a lot of fun. There was a jovial, friendly atmosphere all week and a lovely barbecue on Saturday night.