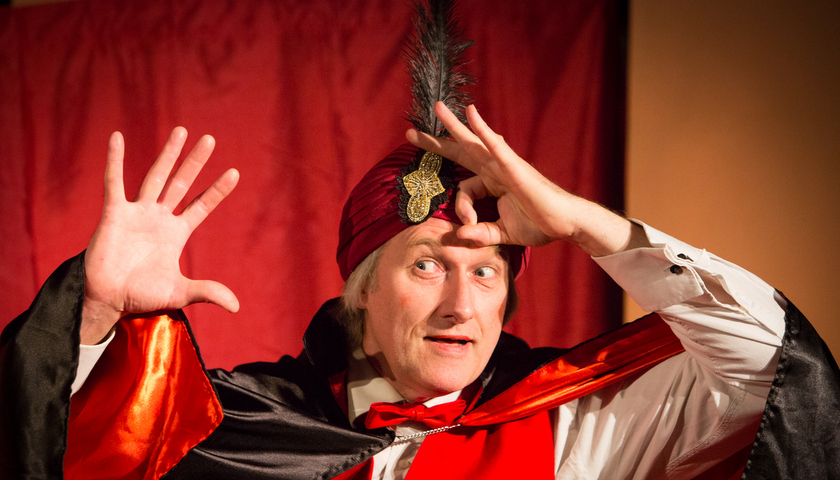 Suffolk-based Common Ground Theatre Company, will be touring East Anglia in October and November, with a riotous, theatrically inventive adaptation of Dickens’ masterpiece, with original music by Pat Whymark and featuring Julian Harries as (among others) Nell’s grandfather, Samson Brass and Mrs Jarley.

Common Ground’s work was recently described by Libby Purves, in Suffolk Magazine, as “wonderfully inventive and creative”, and Andrew Clarke, writing in the EADT, said of their adaptation of The Count of Monte Cristo:

“It takes real skill to take a sturdy piece of classic literature and turn it into one of the most imaginative shows of the year.”

The story follows ‘Little’ Nell Trent, who lives with her devoted grandfather in his London shop, a magical place filled from wall to wall with dust-laden treasures. He keeps his nocturnal gambling a secret, but becomes deeply in debt to the villainous loan shark Quilp. When he gambles away what little money they have, The Old Curiosity Shop is seized by Quilp as payment and Nell and her grandfather are forced to flee London.

On the run, and with Quilp on their trail, the pair fall in with a succession of colourful characters, some friendly, some ominous. Over time, she becomes the parent and he the child, a burden which starts to take its toll on her.

The novel was a sensation when it was serialised in 1840-41. The excitement at the release of the last installment has been compared to the publishing of the last Harry Potter novel, Harry Potter and the Deathly Hallows. It was so popular that New York readers stormed the wharf when the ship bearing the final instalment arrived in 1841.

Julian Harries and Pat Whymark are the creative team behind Stoat Hall, The Mystery of St Finnigan’s Elbow and many more Eastern Angles Christmas shows. As an actor Julian has appeared in Eastenders, Detectorists, Spies of Warsaw, Doctors, and has just completed the recent UK and international tour of Dirty Dancing, playing Dr Jake Houseman.

The tour runs from Wednesday 25th October to Saturday 25th November. For performance dates and venues, call 07807 341 364 or visit www.commongroundtc.co.uk