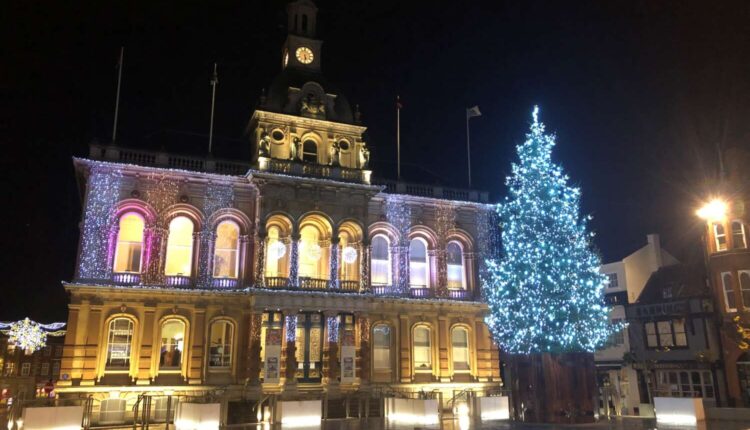 Christmas is coming to Ipswich!

With less than 50 days to go until Christmas Day, Ipswich Borough Council is making sure the town gets its glad-rags on for the festive season.

The modern Christmas tree on the Waterfront has been installed and the traditional Christmas tree for the Cornhill, provided by Ipswich Central, and the town centre lights will be installed over the next few weeks.

The lights and both trees should be in place – and lit – in time for the first Thursday of late-night shopping on 18 November.

This year, the public can drive through Ipswich town centre on four evenings in the run up to Christmas to enjoy the lights.

The scheme, which is usually aimed at Disabled Blue Badge Holders, was extended last year to include all members of the public for the first time in 27 years and due to its success the Council have decided to do it again for 2021.

Between 6pm and 9pm on the below dates the public will be able to enter the pedestrianised town centre at Major’s Corner and drive westwards along Carr Street, Tavern Street and Westgate Street, leaving at Museum Street.

Visitors will need to book a free ticket for a timed slot before they visit – only one ticket is needed per vehicle. Tickets will be available to book via the Ipswich Theatres website from Monday 15 November – www.ipswichtheatres.co.uk.

Drivers must stick to a 5mph speed limit and will not be permitted to stop. Blue Badges must be clearly displayed.

Other Christmas events include a virtual light switch-on from home via the Council’s social media feeds and late-night shopping entertainment on the Cornhill organised by the Council and Ipswich Central.

Fool’s Paradise will be performing their quirky street characters -The Living Lampposts – on Thursday 18 and 25 November. The characters will perform three sets during the evening at approximately 4pm, 5:30pm and 7pm.

The incredible light up drummers – Spark! – will also return this year on Thursday 16 and 23 December. The drummers will perform three sets during the evening at approximately 5pm, 6:30pm and 8pm.

Cllr Sarah Barber, Portfolio Holder for the Town Centre said: “When the town gets decked up in lights that’s when the Christmas spirit starts for me and I hope they, along with the two Christmas trees and exciting late-night shopping entertainment, bring some festive cheer to people in the run up to the holidays. We will be releasing a light switch-on video again this year, which will include a special message from the Mayor of Ipswich, Cllr Elizabeth Hughes, so do keep an eye on the Council’s social media feeds so you can celebrate from the comfort of your own home.

“The drive-through events promise to be a success again this year, especially with the extra two dates we have scheduled. I know how popular they were last year and I urge those wanting to attend to get in quick as tickets are limited and available on a first-come, first-served basis. On the night, please remember to stay in your car and keep moving to ensure that everyone gets a chance to see the Christmas lights.”

Ipswich remembers: service to go ahead on Remembrance Sunday

Independent Suffolk charity St Elizabeth Hospice has announced the return of its annual Christmas appeal, Be a Star, for 2021.