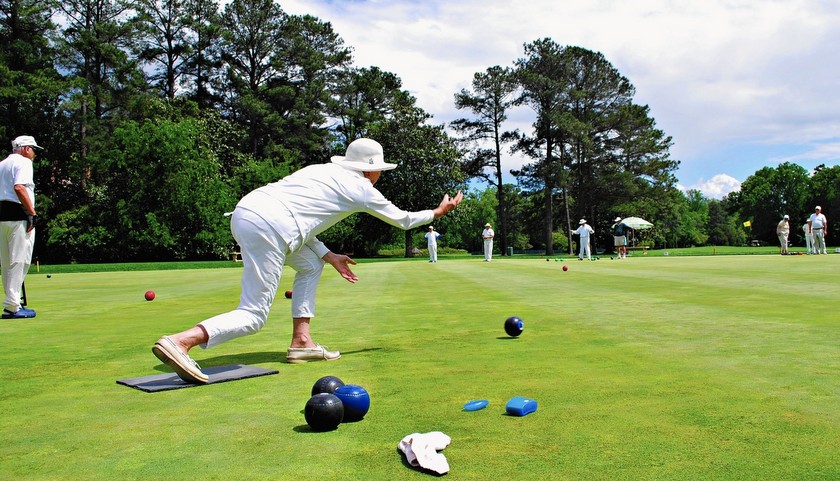 That’s it then. When you read this, their playing season will be over – well almost. On the social side, Saturday 22nd July saw disappointing numbers for the Ferrari Cup with just 12 members playing. Perhaps it was the start of the school holidays and the changeable weather. That said, those who took part enjoyed a good afternoon of bowls. The winning team, by shot difference, was Mike Heather, Malcolm Peers and Les Rollings. Thanks to Mark and Val Vertigans for organising and for providing some very tasty cakes.

Members and their guests showed true British spirit on Saturday 29th July,  when they held their annual barbecue, once again kindly hosted by Tony and Liz Gulliver. Thanks to the hard work of many people, they had a great night. Some put up marquees to keep them dry, some made lovely salads and desserts, and the barbecue food was excellent as always.

Special thanks to Pam and Malcolm Peers for all their hard work in organising this, running the raffle and goodness knows how many quizzes to keep them amused. Thanks also to new member Val Eldridge, for donating an amazing raffle prize.

Sixteen of their members entered four teams in the Boxford Open Event on Sunday 6th August, in total, there were 44 entrants. Two Capel teams made it to the semi-finals and were drawn to play each other, so they were guaranteed finalists from Capel! Sadly, the four finalists – Graham Brewster, Mike Heather, Martin Woodward and Jack High, lost to a strong Boxford set. But once again it was a great day out, well organised by their hosts.

By the time you read this, the Harvest Moon Restaurant will have closed. They have enjoyed a great relationship with this business which has hosted their annual presentation dinner’s for a few years now. Everyone at Capel Bowls Club wishes John, Helen and all staff every success in the future.

Two of their ladies, Carole Howe and Elaine Wright, have also bowled with Ipswich Ladies Bowls Club for several years. This year they reached the EBA County Pairs Finals for the first time and they won. They will now compete at the National Finals at Leamington Spa in mid-August. They have never got this far before, so well done ladies.

Turning now to their league performances, it’s been quite a season. At time of writing, four of the six squads chase promotion, which includes all three of their Kestrels squads, who top each of their leagues. The Kites still struggle to find consistency in the Triples League Division A and sit mid-table. In the Ipswich & District Two Woods Leagues, Kites have found this season tough going against very strong opposition and sit just above bottom spot.