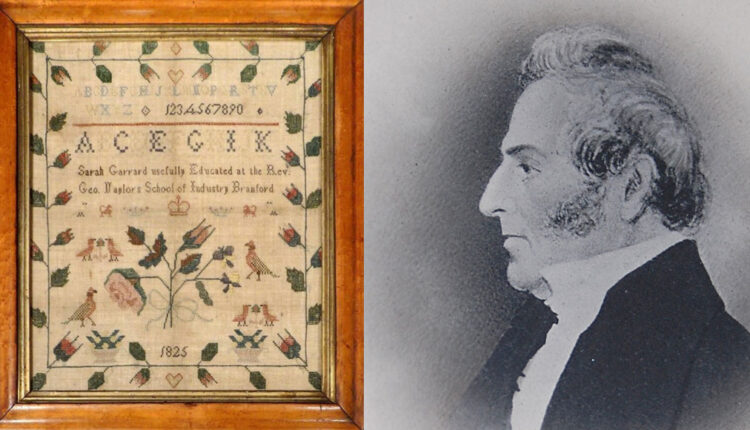 Happy New Year to all our members, we hope you are all keeping well. We still can’t meet, but as soon as we can I’ll be in touch. If you have any suggestions for speakers, please let me know and I’ll see what I can arrange.

Meanwhile, we have an interesting article about a sampler made in Bramford which has been restored by an American company. If it wasn’t for the internet, we would never have known about it.

The history group was recently contacted by a company in America that restores old needlework.

A sampler, which they have restored, was made in 1825 in Bramford and they were hoping to find out more about it as it’s going to feature it in their 2021 calendar. I could tell them that the Garrod/Garrard family had been in the village for 100 years at least by this date, and Sarah Garrod was probably born in 1813, her parents being John and Elizabeth.

Her father was a labourer, as were nearly all the men in the village at that time. We think Sarah married Samuel Ramsey in 1833 and that they were living in The Street in 1841.

We were also able to tell them a bit about Rev Naylor. He was the vicar of Bramford from 1795 for over 50 years. His first wife, Anne, died in 1817 and 13 years later he married Elizabeth. In all he had 11 children with his two wives. Unfortunately, we don’t know where the House of Industry was.

Community Alliance for a Rural Environment

Bus And Train Services Over The Holidays