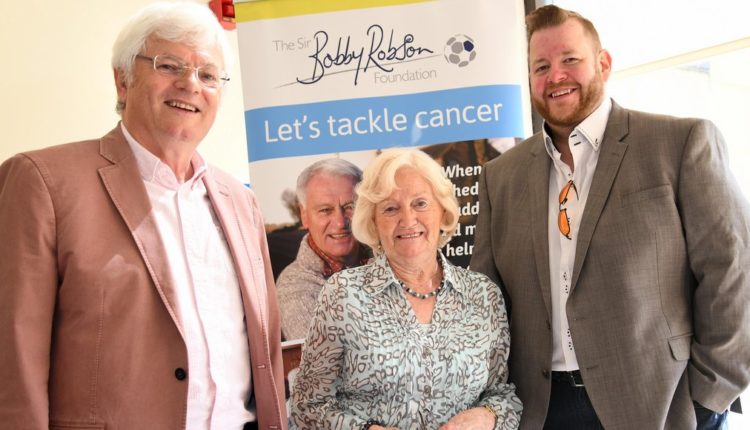 A new play, Bobby Robson Saved My Life, is coming to the Ipswich Regent Theatre on Wednesday 31 July; inspired by Sir Bobby’s life and legacy, and on the 10th year anniversary of his passing.

Written by playwright Tom Kelly, the play explores how one person can have a dramatic effect on another without even knowing it. Focusing on three different individuals, it promises to be a heart-warming, inspirational and uplifting piece that celebrates not only Sir Bobby’s life but also the impact he had on so many. A proportion of ticket sales will go to the Sir Bobby Robson Foundation.

Every performance will raise funds for the Sir Bobby Robson Foundation and Lady Elsie and son, Andrew Robson, met with Tom Kelly and Gareth Hunter, one of the play’s producers, to chat about the play at one of their regular get-togethers to thank fundraisers.

Lady Elsie said: “I’m very much looking forward to seeing this new play. Tom’s explained it’s not only about Bob, but about how people can affect other people without even knowing them. That’s something we see regularly when we meet fundraisers and people receiving treatment through our Foundation. I’m sure it will be an interesting and entertaining night and I’m touched that every performance will help raise funds to support our charity.”

Sir Bobby launched his Foundation in 2008 to help find more effective ways to detect and treat cancer. It has gone on to raise over £13m and his family regularly host small get-togethers where they can find out more about what people are doing to raise money for the charity, and why, and say thank you in person.

At a recent get-together in Newcastle, Tom said: “It was a lovely informal event and meeting Lady Elsie and Andrew was a real pleasure. They really made us feel a part of the Sir Bobby Robson Foundation ‘family’.  Writing the play is already becoming something very special.”

It will then go on to play at the Ipswich Regent Theatre on 31 July, where the football legend enjoyed such great success with Ipswich Town.

Gareth Hunter, from Ion Productions, said: “It was fantastic to meet Lady Elsie and Andrew and chat about the show’s development and about Sir Bobby. It was a great event celebrating people who have raised or are currently raising money for the Sir Bobby Robson Foundation. We can’t wait for the opening night in the North East. And we’re sure the performance in Ipswich will be emotional, especially as it coincides with the 10th anniversary of Sir Bobby’s passing.”

As part of the play’s development, people are being asked to upload a video of themselves describing Sir Bobby in three words to social media, using the hashtag #3wordsforBobby. Submissions can also be sent to either [email protected] or [email protected]. Contributors so far include ex-Newcastle footballer Steve Watson, Collabro’s Matt Pagan and Emmerdale, Still Open All Hours and Red Dwarf star, James Baxter.

3,500 Primary School Pupils have a Fiesta!