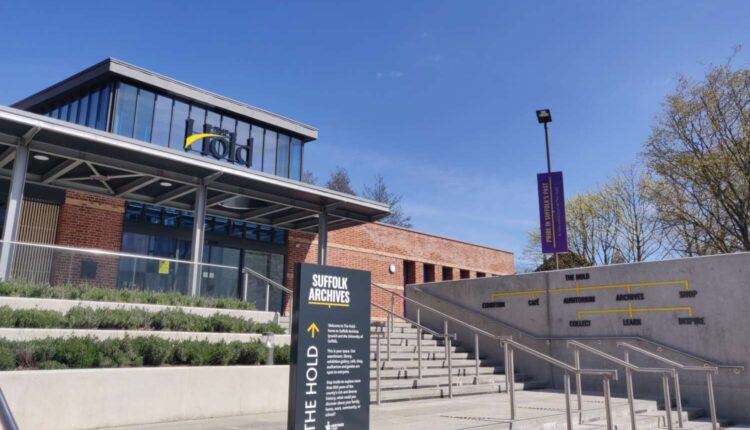 Architecture and building award win for The Hold

The Hold, the new archives and heritage centre on Ipswich Waterfront, has won a prestigious national architecture and building award for the public sector.

SPACES, the Society for Public Architecture, Construction, Engineering and Surveying, named The Hold as the winner in the Community Category at their online award ceremony.

The awards are dedicated to rewarding excellence, collaboration and innovation in construction projects delivered within the public sector and, because they were unable to hold the awards in 2020, included two years’ worth of projects.

The Hold first opened to the public in September 2020 and was officially opened by His Royal Highness The Duke of Gloucester in September 2021. The £20million building is a partnership between Suffolk County Council and the University of Suffolk, and is home to more than nine centuries of history safely preserved by Suffolk Archives.

The SPACES awards judges said The Hold is “A great example of community architecture which actively brings together different user groups, whilst highlighting the value of local historical records.”

They added: “On the judge’s visit, it was clear to see the passion the end user had for the building and what it represents to the community, and praise goes to the Architect and wider delivery team for creating such a valuable asset.”

Cllr Andrew Reid, Cabinet Member for Heritage at Suffolk County Council, said: “It is great news that The Hold has been recognised as such a valuable community building, especially against such strong competition.”

Anne Jenkins, Director England, Midlands & East at The National Lottery Heritage Fund, said: “Thanks to the National Lottery players, we were able to support Suffolk County Council in building the new archives and heritage centre in Ipswich and it is hugely impressive that the quality of the architecture and the contribution to the community of The Hold has been recognised in winning this national award.”

Tim Greenacre, Chief Operating Officer at the University of Suffolk, said “The University is delighted to see The Hold recognised in this way. More than just a new landmark building for Suffolk, The Hold delivers top class teaching and research facilities for our students and staff alongside exhibitions and state-of-the-art archive facilities for the whole community to access.”

The Hold was nominated by Concertus Design and Property Consultants, who managed the project on behalf of Suffolk County Council.

Andrew Rowe, Chief Executive Officer, Concertus Design & Property Consultants, said: “It has been a privilege to help deliver this fantastic flagship new heritage facility for Suffolk. We are incredibly proud to have been part of an exceptional team who have helped to regenerate the waterfront area, benefit the local community and inspire future generations.”

Ian Sharratt, of Pringle Richards Sharratt Architects, said: “The practice was delighted that The Hold had been recognised as an exemplar of community architecture, and thanked the client for the opportunity, the team for their support and The Society for promoting excellence, collaboration and innovation in the public sector.”

James Wilson, Director and General Manager at R G Carter, said: “R G Carter is absolutely delighted The Hold has won this prestigious community-led award. We very much pride ourselves on delivering the very highest standard of craftmanship and quality finish across all our projects and so it is an honour to be recognised by industry professionals in this way. We will look forward to continuing to provide the local community with outstanding buildings.”

For more information about The Hold, details of the latest events and exhibitions, or to book an appointment to view archive documents, visit www.suffolkarchives.co.uk.

Julie’s Christmas Day Splash For Mind, In Memory Of Her Mum, Carol