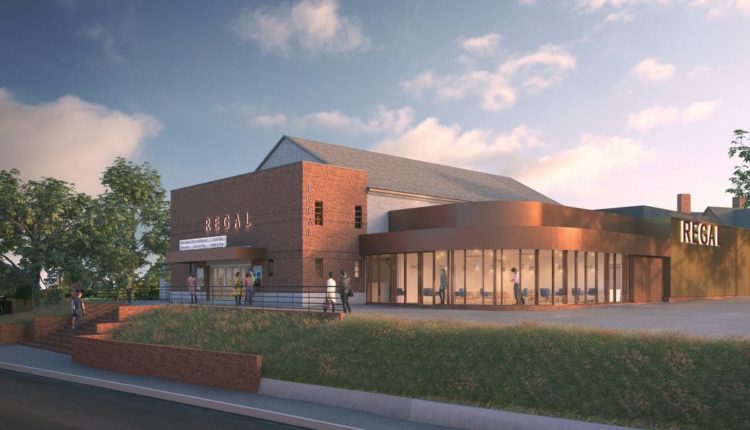 A Story 84 Years In The Making…

Since the Regal first opened its doors in 1936, improvements have continued with the addition of the stage, dressing rooms, bar, 3D digital projector, sound and satellite systems. The new redevelopment project between Stowmarket Town Council and Mid Suffolk District Council is the next step in that journey.

The Regal enjoys a place in the heart of the local community with nearly 70,000 admissions per year.

Manager David Marsh comments: “I’m extremely proud to have overseen the success of the theatre in recent years and I’m even prouder of the work that the design team has undertaken over the past year in planning the redevelopment of the theatre. The team has listened to the views of local people and I am confident that the end result will be an entertainment venue that respects the charm and character of the current building while providing all the modern facilities that today’s customers expect.

Sometimes however, progress is not straightforward. We have been wrestling with how best to deliver the project for some time now. Reluctantly, we came to the conclusion that the cost and timescale of the project are managed most effectively if the site was handed over, in full, to the contractor during the construction period. This will save on cost and also on time, with the programme likely to last 40 weeks rather than 60 disrupted weeks if the theatre remained open.“

The Regal will be closed from February 24 to the beginning of December 2020 to allow for the project to be delivered in the most cost effective and timely manner. However, we can’t leave Stowmarket without a cinema for that long, so we’re excited to announce that we’re taking the Regal on the Road and converting the John Peel Centre into a cinema for around 10 screenings a week.

Launching on Thursday 2 April, we will be bringing all the Regal charm along with our digital projector (and free tea and biscuits with all weekday matinees) to the Church Walk venue.

When the Regal first opened in 1936 the John Peel Centre building had already been in place for over 100 years and many of you will remember that the former corn exchange ran as the Movieland Cinema and Bankside Movie Theatre from 1986 until 1991, so we’re especially pleased to be bringing movies back to the iconic site.

The team at John Peel Centre have been very welcoming in allowing us to set up our temporary home with them and we are delighted to be working in partnership together.

All tickets will be £5, except for Pocket Money Movie, which will continue at £2.50 with any accompanying adult going free. Regal Golden Tickets will also be accepted.