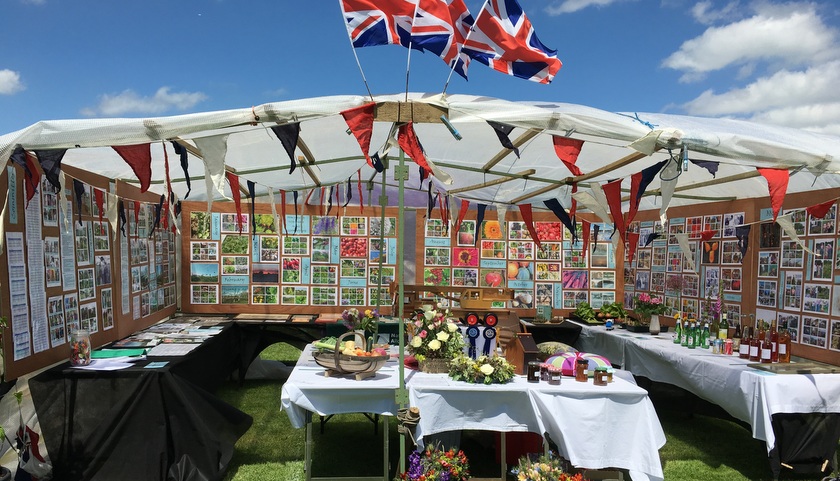 This year Capel Allotments Association celebrates 40 years at Pound Lane, the original 5.8 acre site having been purchased by the parish council in March 1976. Chairman Charles Heath has assembled a comprehensive history of the site. The picture of the association’s stand at this year’s Funday was taken by Becky Stewart.

Maintenance of the site is carried out by the association. The site manager organises maintenance and improvements on site and is helped by two work-ins held spring and autumn attended by volunteer plot holders.

The site is 5.8 acres and has 80 plot holders renting a mix of half and full plots all accessible by tractor paths and with easy access to water. A poly tunnel provides space for 24 poly tunnel plot holders. The site has an electricity supply to the trading hut, a BBQ area and a toilet.

A trading hut is run by the store manager and stocks a range of 230 products all at trade prices plus a nominal mark up. The seed scheme manager organises the NSALG/Kings discounted seed scheme.

The show secretary organises the Annual Flower and Produce Show held over the first full weekend in September. Entries normally reach over 600 exhibits over 120 different classes. This has become one of the highlights of the association year and is seen as a major village event for Capel and one of the major shows in the area. An annual BBQ held in July is normally attended by 100 members and friends.

Membership of the association is £5 and is open to anyone whether they have a plot or not. Membership usually stands at around 350 members.

The association is affiliated to the Royal Horticultural Society (RHS) and in the past exhibited at the 1999 Chelsea Flower Show and a year later at Hampton Court Flower Show where it was awarded a bronze medal. The general secretary represents Capel Allotments at the Suffolk Society of Allotments and Leisure Gardens (SSALG). The SSALG is the Suffolk County organisation of the National Society of Allotments (NAS). All members are affiliated to the NAS, taking £3 from our annual subscription of £5.

One of their plot holders was placed second in the Gardening News National Allotment competition in 2006. Also, in 2006 the association was awarded a Webmasters Certificate from One Suffolk for the website.

Over the years the association has helped finance horticultural machinery for use on site from profits from the trading hut. A rotovator and cultivator are available for hire. Small petrol mowers are available for cutting grass paths between plots. Strimmers and a ride on mower are used by suitably trained volunteers to maintain the tractor paths and grassed areas.

Current (2017) plot rental is £26 for a full 10 rod plot. If a plot holder attends a work-in, a £6 rebate is given. Work-ins, held in the spring and autumn, are when volunteer plot holders carry out site maintenance jobs under the guidance of the site manager.

In 2009 the association commenced the development of a nature area. This has now developed into a delightful area with a pond and many shrubs, plants and bulbs. Information boards around the site give information on pond life, insects and butterflies. Many local organisations have visited the wildlife area, including many youngsters as well as art groups.

The general committee meets six times a year while the executive committee meets five times a year. A whole range of topics are discussed about the running of the allotment site including administration and legal responsibilities of the committee. The AGM is held at noon in the poly tunnel in April after a morning’s work-in.

It’s All Happening In Witnesham