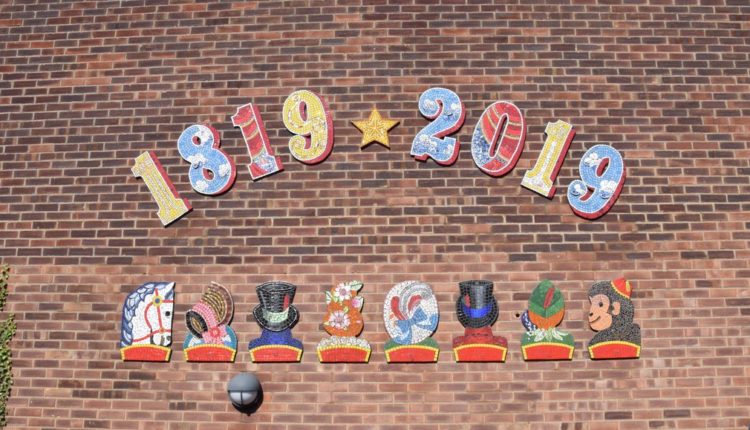 Theatre Royal Bury St Edmunds has revealed a new collaborative mosaic which has been created to celebrate the 200th Anniversary of the theatre. The finished piece has been mounted in the theatre’s garden, featuring people and characters who have been at the theatre over the last two centuries.

Six local primary schools were given the opportunity to work with theatre staff to learn about a figure from the theatre’s past and take part in a drama workshop on the subject. Artists Jacquie Campbell and Heidi McEvoy-Swift of Rojo Arts then spent a day in each school working with the children to make the figures that appear in the final mosaic. Today the classes taking part returned to the theatre to see the mosaic in place, and to participate in another series of workshops in and around the theatre.

The numerals, boldly proclaiming the year the theatre opened and the 200th Anniversary, were put together by Rojo Arts along with staff and volunteers of Theatre Royal itself, to ensure that everyone had the opportunity to be a part of this artwork’s legacy effort.

From left to right, the figures featured are: Crocker’s Horse, Professor EK Crocker was a showman who brought his 30 ‘educated horses’ to the theatre between 1894-1900; A Fan Lady, representing many of the ladies who would have attended the theatre from when it opened in 1819; William Wilkins, the architect of the theatre who partly based his design on the ancient amphitheatre in Sicily; Nanny Fanny, the pantomime dame from Sleeping Beauty, representing all of the pantomimes staged at the theatre since the Victorian period; Florence Glossop Harris, a highly-regarded Shakespearean actress, said to have played every female role written by the bard, and owner of the theatre’s lease 1910-1915; William Charles Macready, one of the most famous actors of his day who visited Theatre Royal in 1828, playing seven different lead roles in five days; Peter Pan, who represents not only the upcoming pantomime but also the author JM Barrie’s visit to the theatre in 1893; and Monsieur Gouffe, the performer whose act involved dressing as a monkey and performing acrobatic feats around the auditorium, most notably swinging from the gallery to the stage on a zip wire, using just three fingers and carrying a child on his back.

Several of these characters are also currently being brought to life by volunteer actors in the Close Encounters Live Interactive Tours of Theatre Royal, which are still running on selected dates until early September, giving guests a chance to meet and interact with them in an immersive history experience.

The mosaic is now on display permanently in the theatre’s garden which opens during performances as a lovely place for audiences to make use of before the show and during the interval with their drinks (perhaps the Anniversary beer, Trapdoor 200) especially during the coming summer months.

To find out about and book tickets for all of the upcoming performances at Theatre Royal Bury St Edmunds, contact the Box Office on 01284 769505, online at www.theatreroyal.org/upcoming or visit the theatre in person.